With these tricks, you will be able to find out the tricking ability of Microsoft Notepad. But before that, do you know:-
Well if you don't, you will know the answers to all these questions after trying these tricks.

The number of flight that attacked the World Trade Centre was Q33N. You might ask what is the trick in that. We could have searched it on the net in an instant. But this is not the trick. The trick starts now:-
Note: Change back to your default font. 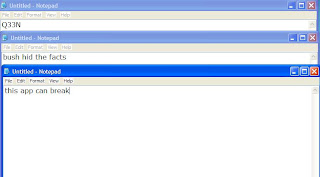 Well the President of United States is undoubtedly one of the most powerful man. No one dares to test it. But now that Bush is no longer the President, .........we would. To test his authority over Microsoft, follow the steps given below:-
Trick/Answer 3

Well, most people think reputation is everything and the top brains at Microsoft are no different. To test their reputation building scheme, try the steps given below:-

Try these notepad tricks yourself to know the results.

On a serious note, none of the flight that attacked World Trade Center had the flight number Q33N. It is just a rumor which became popular due to its peculiar nature. Moreover, did you notice some similarity in trick 2 and 3? Yes, you figured it out correctly, both of the statements have the word length pattern of 4,3,3,5 which seems to cause the bug. It is not that Microsoft is that much 'worried' about their reputation or the U.S. President have absolute control over Microsoft.